13 random items on Friday the 13th 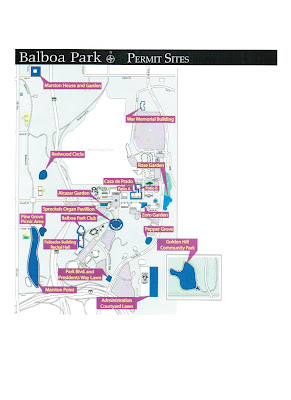 Random fact: This is a map of Balboa park, which is a few blocks from our house. PG and I got married in the Redwood Circle.

1. I love reading everyone on my blog roll, but I haven't been doing so for a while. When I start to think about logging on and catching up with all of you, I get overwhelmed and then I don't do it. I am starting to understand why some of our blogging friends have closed up shop. But I simply refuse to let CPW die.

2. I am having dinner with Tanya Espanya tonight. She is here with Rowbear and spawn, and after threatening to cook for me has now decided to take me out for Mexican.

3. My friend Sarah and her husband and two spawn are coming to my house tomorrow. I'm supposed to feed them drinks and then take them somewhere local for dinner. I've considered cooking but I get frustrated when I think of things to make and then realize 3 of the implements I would need are still with Poor George in New York.

4. Poor George plans to be here next month, with the rest of our stuff. Except that he's decided (with my approval) to give my piano to some good friends of ours. Because we want to buy a grand piano, so why pay to move my console across the country? I have mixed feelings about this because I don't want to live without a piano for too long, yet I don't know when we'll be able to afford a grand. Poor me.

5. 30 Rock is the funniest show ever. Except for The Office. But 30 Rock may even be funnier. I can't decide, and you can't make me.

6. Our bedroom is lavender and purple. Is that really gay or just a little gay?

7. I love my job. I don't make enough money, but it's the perfect job for me. The only downside is that since I'm no longer a Strategic Sales Executive I don't have as much to bitch about, which makes for much less entertaining reading for you. Suffer.

8. My life is so quiet compared to living in the big city. It's strange. I like it, but it's strange.

9. I go country western dancing every Thursday now. I've been toying with the idea of having a country western wedding reception, since PG and I originally planned on having a "big" party to invite our friends and family to with more than a week's notice. It would be really fun. We could have an instructor for a few hours to teach the novices how to do the steps. Help me sell PG on this.

11. My friend Shelly and I got really drunk at a work conference a few weeks ago, and decided (while drunk) that it would be a good idea to go into a video booth and make a tape of ourselves drunkenly pitching one of our products. We both had remorse the next morning, but even more so a day later when they decided to play it in front of 2,000 of our colleagues. Apparently we "won" second place for the "best pitch." We each got a $250 gift card as a prize, but I asked my boss if I could be fired instead. I looked like a TOTAL dork.

12. On the same night that I made the drunken pitch video, I told my work friend Lori over and over how much I loved her. I think I've become too isolated in this job because I don't go to an office, and the only people I talk to during the day are my clients. I'm getting weirder by the second.

13. It's Friday the 13th, so I think I'll end on 13. Anyone have any good tips on how to stop procrastinating? Or how to treat a harelip?
Posted by Coaster Punchman at 8:51 PM

Say hi to Tanya for me!

Good to hear from you again, old friend. If you want to get back into reading and catching up, I can guarantee my posts are brief...

I used to run at Balboa park back in 1979 when I was there in the Navy, what a beautiful place!

Good to see you out here again, take care of yourself.

Spouses should not have to read blogs to find out what their spouses are up to...

Tom, excellent list. I just posted about our evening.

We miss you here in the bloggosphere. Glad to see you back.

Why aren't you on 30 Rock? Then we wouldn't have to keep checking for signs of life but could just see you on Thursdays for a fix!

Lavender and purple is super gay but acceptable. If I hear anything about dried flower arrangements dotting the landscape, there could be an intervention.

Brian's going to break down and sob that he hasn't been able to tell anyone but he's been country/western dancing and just can't stop. I know it.

I hope Tanya puts you in her suitcase (she knows how to pack!) and brings you back at least until George is ready to join you. Then he can come here to collect you and everyone goes home happy.

Megan says 30 Rock is better, but I'm not quite ready to commit to that yet.

Good to see you CP! I think country western dancing is splendid. Do you have a cowboy hat and flashy shirt yet? If no, I can send you some of mine.

Purple stands for passion in a bedroom. ALL happy peeps should sleep in purple bedrooms!

For the record, peach is a relationship KILLER! Remember that, so if you happen to be going through someone's house & they show off their peachy painted bedroom walls you'll know they are totally fake cause they can't stand each other.
;-)

Okay, I'm going to stop procrastinating and ask you what you mean by your question, "how to treat a harelip?"

I don't have the answer, but I do have a harelip, and I can tell you how other people treat a harelip. 1. Children make fun of a child with a harelip and sometimes punch the child in the mouth, while proclaiming, "You're ugly!"
2. Adults pretend not to notice the harelip.
3. Family and friends try to reassure the harelip-bearer that it doesn't matter and that he/she looks just fine.

If your question is technical, and you would like to know how to "fix" the harelip, I have some advice. Find a really good plastic surgeon who has had lots of experience with repairing cleft lips. Do NOT go to some moron who has no idea what he is doing and after he performs the botched surgery tells the disappointed harelip-bearer to just use plenty of lipstick to "draw" a bow on the deformed lip.

There! Does that help?

Coaster Punchman
I am Coaster Punchman, or CP for short. I started this blog in 2004 for no reason other than I came across the "Blogger" app while randomly surfing, and decided "well why not?" During the early days of blogging I fell into a community of interesting writers and nice people, many of whom remain my friends today on Facebook. In late 2017 I decided Facebook was becoming too large a distraction, and decided to ease out of that and ease back into the blogging world. I'll be here if you care to peruse my thoughts on life and my world.